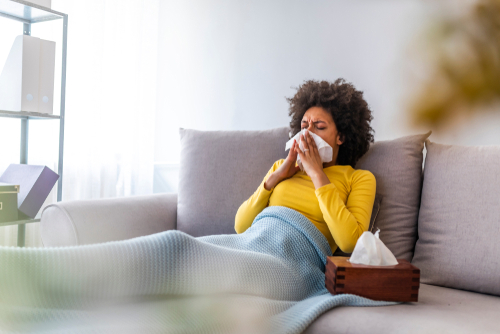 There’s nothing like an early burst of sunshine and summer in mid-March in Ireland to boost your spirits.

There’s one small side effect though that unfortunately blights the lives of sufferers: the early seasonal onset of hay fever.

Already pharmacies are beginning to experience shortages of antihistamines, sinus medications and other medications. Some will tell you though, that even the strongest medication has little effect on the most hard hitting cases, making life miserable for those who suffer.

The good news is there is a way to deal with hay fever naturally, to help relieve symptoms and restore balance in your life. Try these tips at home and see if they help you.

Vitamin C
A powerful immune booster, Vitamin C also acts as a natural antihistamine. It helps to decrease the body’s production of histamine when it responds to an allergen, such as those caused by hay fever. As a result, you might find relief from hay fever symptoms such as itchy eyes and ears, congestion, runny nose and sneezing with a daily Vitamin C boost.

Honey
Not just any ordinary honey, but local honey sourced from bees that collect pollen from plants near you. Local honey taken daily will help you build an immunity to pollen allergens and reduce the effects of hay fever during allergy season. You’ll need to start at least 3-4 months before the season though to give your body enough time to adjust.

Ginger
Ginger is a natural antihistamine and also decongestant which is great news for those who suffer from clogged sinuses during allergy season. Take natural ginger steeped in hot water with a teaspoon of local honey to make a delicious tea to soothe allergy symptoms.

Beeswax
A popular strategy to help prevent hay fever is to line the nostrils and lips with beeswax to catch the pollen before it enters your system and causes irritation to your sinuses and throat. Bee Loved’s beeswax Lip Balm is a natural and inexpensive option that helps prevent hay fever before it takes hold!

Chamomile
Chamomile is a wonderfully calming herb and is widely used to reduce redness and inflammation. That’s why we use chamomile in our Face Cream, a welcome salve for red, dry and sore lips and nose irritated by sneezing and seemingly endless tissues!

Natural skincare
The last thing the sensitive, inflamed skin around your mouth, eyes and nose need is chemicals in skincare products. Rather than the soothing action you need, chemical additives will inflame your skin further, and can lead to stinging, itching and discomfort. A chemical known as triclosan, found in soap, cleansers and antibacterial cleaning products, was found to increase the likelihood of allergies and hay fever in people aged 18 and younger who had a certain level of exposure to it. Always check the label on your skincare and cleaning products; choose natural and go green not only for the environment but for a hay fever rescue!

Why Rosemary is ideal for dermatitis, acne, eczema and psoriasis

Are plastic bottles leaching toxic chemicals into your skincare products?

This website uses cookies to improve your experience while you navigate through the website. Out of these, the cookies that are categorized as necessary are stored on your browser as they are essential for the working of basic functionalities of the website. We also use third-party cookies that help us analyze and understand how you use this website. These cookies will be stored in your browser only with your consent. You also have the option to opt-out of these cookies. But opting out of some of these cookies may affect your browsing experience.
Necessary Always Enabled
Necessary cookies are absolutely essential for the website to function properly. These cookies ensure basic functionalities and security features of the website, anonymously.
Functional
Functional cookies help to perform certain functionalities like sharing the content of the website on social media platforms, collect feedbacks, and other third-party features.
Performance
Performance cookies are used to understand and analyze the key performance indexes of the website which helps in delivering a better user experience for the visitors.
Analytics
Analytical cookies are used to understand how visitors interact with the website. These cookies help provide information on metrics the number of visitors, bounce rate, traffic source, etc.
Advertisement
Advertisement cookies are used to provide visitors with relevant ads and marketing campaigns. These cookies track visitors across websites and collect information to provide customized ads.
Others
Other uncategorized cookies are those that are being analyzed and have not been classified into a category as yet.
SAVE & ACCEPT
×